Grave Robber (Holmgard and beyond.) 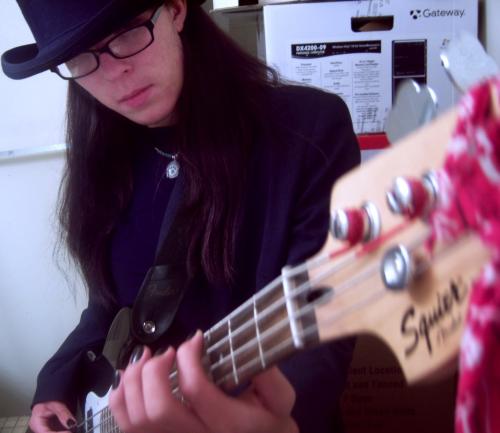 Me and my bass

He knows he loves me.

I'm a punk kid at heart, even though my boyfriend believes otherwise
☺ My favorite color is red
☺ I've been in a relationship with [WonderTweek] for over 3 years.

☺ I spell things wrong because it makes my [WonderTweek]angry :]
☺ I think everything is comfey
☺ Punk is NOT dead

This is my fav pic of him bein goofy

Longboarding, skateboarding, hanging out with friends, shopping, going to the mall, designing clothes, playing my bass guitar, playing videogames, meeting new people, going to concerts, remember the good times with my dad(R.I.P) yea stuff like that.

Snobby people. People that steriotype other people. Conceted people. ICP and most icp kids( a have met quite a few awesome ones though) Wearing all black.

Jeepers kreepers.Howels moving castel. S.L.C punk.The dark crystal.The labrynth.The road to el dorado. The sandlot.the lion king 1 and 2.The nightmare before christmas. crank. The phantom or the opera.The breakfast club. to be continued

Gender: male
What do you do?: Being lazy
Place of living: USA-Colorado
Exact place of living: Littleton
Known languages
Elfpack crew wannabe: Yes
Music
Other interests
Civil status: live together with partner
Sexual preference: both sexes
Body shape: tentacle monster
Height: 173
News about Elfpack
Help - How does Elfpack work?
Get $10 worth of Bitcoin/Ethereum for free (you have to buy cryptos for $100 to get it) and support Elfpack!