[Please note that NO character can have any extra powers like fire, water, shadows, lighting etc. You can only have mind control and Mind reading as well as super strong and faster and keener sences too. Only immortals can be inforces!]

Username: [Tis gone but never gone]
Character name: Marguerite Argeneau Notte
Age: 712
Immortal or Mortal: Immortal
Sexual like: Guys
Job: Private investigator
History: Marguerite was married to Jean Cladue Argeneau until he died in a house fire. She has five children (Lucern, Bastien, Etienne and Lissianna with Jean Claude) who all have lifemates well all but Christian her son with Julius Notte her second husband who is her lifemate. Marguerite is known as the match marker in the family because she has found a life mate for each of her children all but Christian.
Picture:

Username: [Tis gone but never gone]
Character name: Luciana Argeneau Hewitt (But she gets called Lusy)
Age: 20
Immortal or Mortal: Immortal
Sexual like: Guys
Job: Student
History: She is the daughter of Lissianna and Gregory Hewitt. She is at college studying fashion. Lusy has a very, very big family with lots of uncles, anuties and cousins and there is a lot of drama in her family. Lusy wouldn't mind finding a life mate but she is a bit young for it.
Picture:

Username: [Tis gone but never gone]
Character name: Ruben Jones
Age: 25
Immortal or Mortal: Mortal
Sexual like: Girls
Job: Photographer
History: He is a photographer for Photography Monthly. Ruben grew up in a big family with a alots of ups and downs, he's parents are no longer together so now he has a step-mother and step-father and three half brothers-Mike, Joe and Kevin- and sisters-Bethany and Abbey. He has a twin sister Una and a older brother William.
Picture: His hair is black and his eyes are a light green with bits of gold in them

Username: [Tis gone but never gone]
Character name: Emilia Notte
Age: 2000 or so
Immortal or Mortal: Immortal
Sexual like: Bi
Job: Inforce/Private investigator
History: Emilia suvived the fall of Alantis but her life mate did not, he died along with her three daughters. Emilia moved to Italy after a while of traveling and getting use to the new world. Emilia is the sister of Nicodemu Notte and she helps him with the family business at times but she is too busy now as she hunts rouge and no-fangers. Emilia is on the look out for a new life mate but shes's not sure seh will find him.
Picture:

Username: [Ritsuka-Kun]
Character Name: Kaname goes by Kana for short
Age: 950
Immortal or Mortal: Immortal
Sexual Like: meh he doesnt know but he's been around so long he doesnt really care or does he? XD
Job: doesnt have one yet
History: He only really remembers the last 50 yrs of his life. Before then is all either a blur or completely blacked out. All he knows is that he is part of a pure and royal blood line of vampires. The life does bore him but most of the time he just sits in his mansion and reads.

Username: [wolvie]
Character name: Slizrn
Age: 275
Immortal or Mortal: Imortal
Sexual like: bi
Job: is looking for one
History: he has no memory of his past at all he's not even sure of how old he is :-/ (more coming when i can think :D)
Picture: (comin soonish)


Username:[Sigyn, The Faithful Wife]
Character name:Chantal DuVondet
Age:20
Immortal or Mortal:Mortal
Sexual like:Guys
Job:She owns and runs a pet rescue and rehabilitation center.
History:She was abused by her father and watched him kill her kitten when beating her wasn't enough. Once she turned seventeen she graduated early from high school, and went to a vet tech school and graduated recently. She got a loan and started the rescue.
Picture:

Username:[Sigyn, The Faithful Wife]
Character name:Aden DuVondet
Age:21
Immortal or Mortal:Mortal
Sexual like:Bi
Job:Video Game designer and model
History:His father beat him and his sister, despite him trying to stop the man. He stayed in the house until he and his sister graduated(They did in the same year). After that he started modeling to get her through college and help her keep her business afloat. He recently graduated from a gaming design school.
Picture:

Username: [Bastet]
Character Name: Matt Consintean
Age: 332
Immortal or Mortal: Immortal
Sexual like: Bi
Job: Game Tester as well as owning a few small business's around the city.
History: He is the third born of five siblings, all related by having the same father who had gone rouge for a while before finally caught and found guilty. He raised his two little sisters basically on his own, which put a wedge between him and his older brothers. When his twin sister found dead, he got himself lost in video games and started testing them for companies.
Picture: 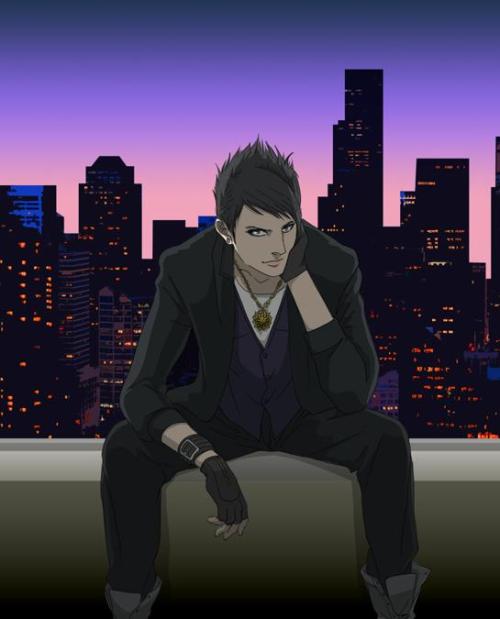 User Name: [Bastet]
Character Name: Lillith Consintean though most call her Lilly
Age: 92
Immortal or Mortal: Immortal
Sexual like: Men
Job: A jack of all trade and makes cloths in her own shop
History: She is the youngest in the family, being raised by her brother since her mother went insane after giving birth to her. She was very weak and frail as a child but her brother got her what she needed at any cost. Once she was able to move out she did, opening up her own small shop and but her life into it, which allowed it to grow, becoming very popular.
Picture: User Name: [Bastet]
Character Name: Rafe Malice
Age: 29
Immortal or Mortal: Mortal
Sexual like: Men
Job: A rouge Doctor who does under ground dealings
History: Has been living on his own since he was a teenager. Started training to be a docotor since he was 18, being a fast learner. By the age of 25 he was working hos own small office to those who were in certain associations that are not too keen on getting public help, gaining enough trust from the immortals to not get his mind wiped, mostly. Is quiet wealthy from his job flaunts it well.
Picture:

Username: [WASHACKED]
Character name: Maximus Turrner
Age: 12
Immortal or Mortal: Immortal
Sexual like: Female
Job: None
History: He's a half breed, his mother was a human and father a vampire which is very very rare. His father had left before she found out she was prgent and she eneded up dieing once he was born he lives in foster home to foster home for a bit but now lives on the streets after draining his last foster parents.
Picture: